Want to See Me Dance Naked in My House? Pay Attention to the Signs 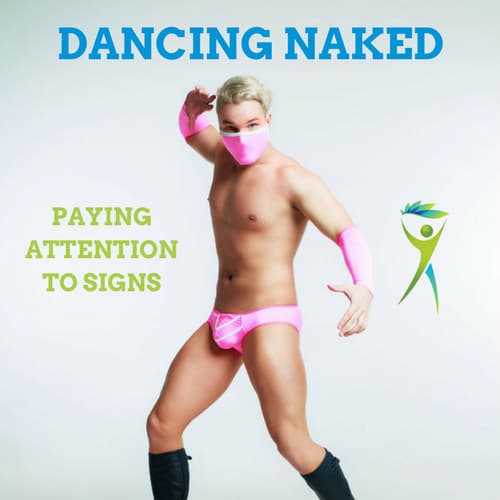 08 Jan Want to See Me Dance Naked in My House? Pay Attention to the Signs

We must take the consequences of messages received. ~Carl Jung

Do you listen to the signs?

Has you heart waved the white flag in surrender to your deepest wishes?

It was Saturday morning. Two days ago.

While we normally don’t have Saturday morning patient hours, we scheduled a few patients because of the shortened holiday week.

On January 2, the move to the temporary space that we were supposed to be occupying until we can move into the bigger, more beautiful Barefoot Rehab space happened without a hiccup due to the help of my friend Dmitry’s moving company, Falcoln Moving and Storage.

The temporary space is on the second floor. Congested with narrow walk ways. The lights in the treatment room are harsh.

Last week, I asked a couple of patients to get their opinion:

What does the energy of this office feel like to you?

Their responses, all bundled up, were:

It works for now, but I wouldn’t want to be treated here forever.

They were being nice.

I was struggling to be fully present because the space didn’t feel like it would allow for fully focused treatment and healing to occur.

The wrongness of the space culminated when we walked into the office on Saturday morning, I could see Katie’s breath. The printer had a dent in it because a side-piece of the furnace had blown off like a gasket and water had frozen onto the floor. The heating guy and landlord told me it would be fixed next week. “When?” I asked. “I have people who need treatment.”

“Sometime next week,” they responded. The lack of certainty was a clear sign to me that the thought of dancing naked was something I needed to surrender to …

Well universe, I guess we’re not supposed to be treating in this space right now.

In April of 2017, I went to the Temple of the Way of Light in Peru for a 9 day ayahuasca retreat.

The Temple, along with ICEERS (The International Center for Ethnobotanical Education, Research, and Service), is leading the way for medical research on ayahuasca. According to their research page, here is a list of some of the possible effects of ayahuasca consumption:

At the Temple, I had a vision of me dancing in front of my computer at home, naked, in the daytime, because I had lost my mind.

I asked the doctor on staff responsible for integration:

What does the vision mean?

That vision stuck with me, even though I didn’t quite have an idea of what it might mean.

I read 3-5 books on shamanic, tribal, and energy healing last year. Themes of community healing, observing how people suffer due to the mind’s neglect of the heart, and themes or symbols of collective consciousness have been coming to me.

If you’re not sure what I’m talking about, consider the dragon.

The symbol of the dragon is gaining momentum during this time of the twenty-first century (but not enough yet for the Brooklyn Nets to re-brand as the Swamp Dragons). Game of Thrones author George Martin feels it. He wrote about the dragon in his books. Watching the Game of Thrones series, the conversation of the actors and images of the dragons has been becoming more rampant as the seasons have gone by.

Below the dreamy Jon Snow meets one of the dragons for the first time.

A friend of mine recently saw a new business in Bergen county with a dragon logo.

The dragon is a symbol of transformation.

Our people … the people of New Jersey and the greater country at large … subconsciously sense the energy of transformation.

What might be needing transformation? You might be asking yourself. I don’t know the answer. But time will tell.

The dragon symbolizes transformation. My naked dancing symbolized something.

Over the past two weeks, I’ve spent 4-5 days doing nothing.

I’d wake up. Feed and let the dogs out. I’d drink water and eat food.

As far as surviving to tomorrow, that was it.

The rest of the day was spent under lit candles, meditating, reading, journalling, altering my mental state, and inviting friends over who feel “something in the air” similar to what I’m feeling.

In the Language of Emotions, Karla McLaren observes how depression is your spirit’s of way of saying:

No. This is not the path. Your path is so wrong that I’m shutting you down.

Depression isn’t meant to be negative. Over my brief 33 years on this dirt rock, I thought depression was my spirit saying, “You shouldn’t exist. Why don’t you get out of here?”

Karla freed me by saying:

You’re just doing it wrong. Pay attention to the signs.

Funny how this cold came and blew the gasket off the furnace.

Now, we get to treat patients in my home for a little while.

Don’t worry, I’ll save the nakedness for when you’re not here.

I have “LOVE” tattooed on my knuckles.

I curse in our business communications and while treating patients.

I hug you when you come for treatment.

Now, you’re going to get treated by Barefoot Rehab at 144 Rainbow Trail in Denville.

You’re supposed to wear all black to a funeral.

I went to court a few months ago and I wore a suit and tie.

The ceremony of marriage seems to warrant the wife wearing all white.

I get it. We people have expectations and when something doesn’t fit, we mentally and physically throw away people, things, belief structures, and dreams.

Some of my current patients will not come back to see me because I don’t fit expectations.  Prospective new patients won’t even give me a chance because one word doesn’t fit into who they think a doctor is supposed to be.

That’s one of the consequences of what Carl Jung is talking about in the quote above.

Losing the opportunity to serve hurts me.  On the flip side …

That dream of me dancing naked at home was my heart’s way of saying:

Chris, so what? Lose your mind. Let it go. There’s something bigger and deeper for you under the social construct.

And I resisted for 9 months.

Until the universe helped me by forcing me to treat patients at home.

To explore more than physical healing for your annoying, frustrating pains and to see what would occur?

Is it just about your neck pain?

Maybe we can decide to look at your heart, too?

Maybe, this will heal mine?

Do You See, Feel, Hear, Dream of, Or Smell Signs?

In shamanistic tribes, there’s no individual.

What I see is what you hear is what he feels is what she smells.

When one person has a vision, it’s not just meant to be for that one person.

So the vision gets shared and the elders can let it ruminate in the heart and mind to be made sense of.

Your signs aren’t just yours. They’re mine too.

What are they telling you?

What are you supposed to do differently?

How can I help you?

If it isn’t clear to you yet, when you heal, I heal too.

I’m talking to you, but I’m also talking to the mirror and the reflection I see when I look into it.

Your signs are my signs.

Is there another way for you to listen, pay attention, and follow the signs?

There may be consequences to following the signs.

But what’s the cost of your heart and soul?

“Dancing naked”, the subconscious messaging of my heart, scares the bejeesus out of me as I type these words.

See you at 144 Rainbow Trail in Denville.

What is your experience with signs? Have you listened to them and acted because of them? Have you surrendered? Or have you resisted? And how does that feel?