If The Soup Nazi Had a Pain Clinic 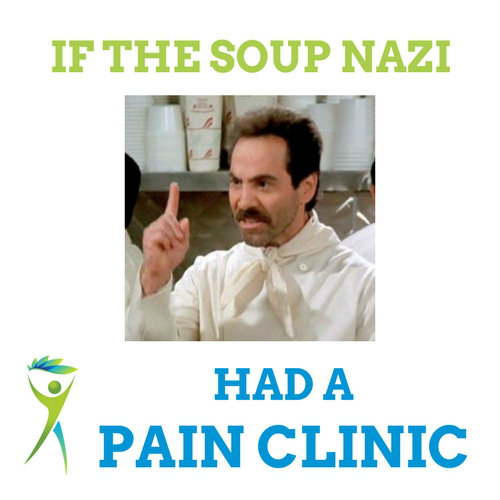 27 Nov If The Soup Nazi Had a Pain Clinic

Most of us between the ages of 30-60 remember the Soup Nazi of Seinfeld fame well.

Soup so good, you’d do anything to get it.

Even if it meant following his seemingly insane processes.

Call him Al Pacino or kiss in his line and receive the inevitable:

No Soup For You!

I’ll tell you one thing:

If the Soup Nazi ran Barefoot Rehab, there’s no way you’d all get so many refills on your prescriptions for chocolate almonds.

At Barefoot Rehab, we do our best to give everyone the most delicious “soup” possible.

We’ve rebelled against our Pretend Uncle Mr. Soup Nazi to deliver our product in our own way:

Similar to the Soup Nazi, we have implemented processes at Barefoot Rehab that are for your own benefit.

Aaron (name changed to protect his privacy – his story doesn’t end happily) came into our office several weeks ago with significant tightness in his hamstrings, thighs, calves, and ankles.

He is 32 years old and is tight, pretty much all of the time.

Somehow deprived of pain, Aaron had run a marathon and wanted to get back to running but was nervous to do so.

To put it lightly, Aaron’s tests were a train-wreck. Aaron’s Hamstring Stretch Test was in the good range: 76 degrees on the right (84% function) and 78 degrees on left (86% function). Aaron’s Face-Up Heel-to-Butt Test showed more than 4 finger breaths on both sides. Since I didn’t have any more fingers to measure, I got out the ruler. His heel was 5.5″ away from his butt on the left and 7.5″ away on the right.

As a result, Aaron could not even do the Kneeling Butt-to-Heels Test as seen below. Fortunately, Aaron had a significant amount of adhesion that could be removed to fix his tightness. After the exam was finished, we met at the whiteboard to discuss his diagnosis and what treatment would look like.

I communicated how treatment would start at the left ankle, where we would shorten the muscle or ligament, then I would create tension on the tissue, and we would stretch it in order to tear the adhesion out of the body.

The treatment plan would start with two treatments a week for four weeks.

Dr. Chris (Me): Any questions for me?

Me: Great. We’re all done for today. I’ll take you out front where Sharon will schedule your treatments for you and we can get started as early as tomorrow.

Aaron: You’re not treating me today?

Aaron: (not a happy look on his face).

You know that look when you’re talking to somebody, you say something, and you can see that the look on his face is not matching the words coming out of his mouth?

The look on his face was straight up, pissed off. The words coming out of his mouth were: silence.

So I asked him:

Me: What’s going on in your head right now?

Aaron: Why can’t you treat me today?

Me: Allow me to explain.

Aligning the Psyche So You Can Get Out of Pain

People in pain who come into our office have NOT been hurt for a few days or even a few weeks.

I’m talking months to years of pain and a lack of pain-relieving results with other therapies and interventions.

Most of these people didn’t have one trauma or accident that caused the pain.

They had months to years of abuse to their body that caused the pain to gradually, get worse and worse.

It was a process.

It wasn’t a magic trick, a random act, a flash in the pan, or any other momentary metaphor you can think of.

To get out of pain when you’ve been in pain so long, guess what needs to happen?

The process most often results in some amount of permanent relief within the first 5 visits. If there is no relief, then a referral for an MRI or to an orthopedic surgeon or functional medicine doctor is on the horizon. That process starts off on the right foot when there’s a deep, psychological understanding of:

To convey the value of that information inside of all of our brains, we need to discuss Daniel Kahneman, who was named the 7th most influential economist in 2015 by The Economist.

I already wrote about his book, Thinking Fast and Slow, and how specialists like doctors develop their expert intuition and when you can trust your doctor. Mr. Kahneman popularized the Peak-End Rule, a judgement the human brain automatically makes that puts a larger than normal value on the peak (i.e. the most intense point) and the end, rather than the average of the overall experience.

A 1993 study titled “When More Pain Is Preferred to Less: Adding a Better End” by Kahneman, Fredrickson, Charles Schreiber, and Donald Redelmeier provided groundbreaking evidence for the peak–end rule. Participants were subjected to two different versions of a single unpleasant experience. The first trial had subjects submerge a hand in 14 °C water for 60 seconds. The second trial had subjects submerge the other hand in 14 °C water for 60 seconds, but then keep their hand submerged for an additional 30 seconds, during which the temperature was raised to 15 °C. Subjects were then offered the option of which trial to repeat. Against the law of temporal monotonicity, subjects were more willing to repeat the second trial, despite a prolonged exposure to uncomfortable temperatures. Kahneman et al. concluded that “subjects chose the long trial simply because they liked the memory of it better than the alternative (or disliked it less).”

Even though the participants suffered for 90 seconds instead of 60 seconds, they preferred the longer duration because it was a less painful memory!

In other words, because the:

Thus, the value of what happens at the end of an experience.

Let’s circle back to Aaron:

The peak of our first visit was when I put 6″ of ankle blocks (which is a passing grade for the Knee to Wall Test) in front of his toes and told him to touch his knee to the wall like I did below.

0.5″ is almost the worst range I’ve ever seen in this test. The end of the visit was when he was told what his diagnosis was. The value of the diagnosis is that without it, therapist and doctors throw spaghetti at the wall. You’ve seen this when you go to a chiropractor or physical therapist and they do the same adjustments, machines, or exercises over and over again without considering:

What tissue is the problem here?

Those two moments are the perfect place for a patient to respect the process of reversing the degeneration that was sure to get exponentially worse unless we started to remove the adhesion and take stress off of all of the joints in his lower body.

Our Barefoot Rehab processes would not allow for the end of the visit to be Aaron getting treatment amidst all of the information we went over, only to think about how he’s feeling leaving the office instead of the process of onion unlayering that needs to happen to this 32 year-old man in a 60 year-old body.

Aaron: But you create the policies right? (implying that I could break the policy if I wanted)

Me: Yes, I’m involved creating the policies with our staff. And those policies are in place for the efficient operation of our practice and all of the staff and patients inside it.

Aaron: But you can break the policies right? (at this point, he looks like he’s ready to punch me).

Without looking me in the eye again, he gathered his stuff and walked out of the office.

He had paid for the visit before seeing me.

As he was walking out the door, Sharon asked:

He lied and said:

If It Didn’t Hurt, I Wouldn’t Have Written This

Since Aaron walked out on me, I’ve battled myself in my head.

I communicated to him that this would be a long-term process (meaning this would take many treatments) based on how he had abused himself. Aaron was 100% on the same page as me with the diagnosis and treatment (and since he didn’t have insurance, would cost him $75 per treatment).

I could’ve treated him that first day.

If he didn’t discontinue his own care, I could’ve treated his ankles 10-20 times, fixed them as much as possible, then moved on to every other failed test that Aaron had. He would have felt no tightness on a daily basis and could’ve possibly started running again.

Walking out of the only certified adhesion-removal practice in New Jersey, now, he’s sure to stay tight and hurt himself badly if he ever goes back to running.

As far as my ability to sleep at night, I’m glad I failed him sooner than later.

If the patient and I aren’t on the same page at any moment, the probability of permanent pain relief drops significantly.

Failing him later means I’ve done wrong by him. He wasted his time, money, and energy in my office AND he did not get what he paid for.

Aaron wasn’t the first patient I’ve failed and won’t be the last. Heck, I’ve even had a patient tell me to F*** off.

Every time a patient stops their own care before I’ve helped them as much as they could’ve been helped or they leave dissatisfied, I feel emotional pain.

If it didn’t hurt, I wouldn’t spend so much f***ing time pondering what I could do better.

Here’s what I’ve learned and what we promise to do at Barefoot Rehab from this point on:

At Barefoot Rehab, we can’t help everyone.

But we can love you, tell you the truth, and get you out of pain better than any other pain practice in North Jersey.

If only you’ll wait 24 hours for the first treatment … Please.

The Soup Nazi has processes for a reason. They work for his creation of soup. Barefoot Rehab’s processes work for our delivery of permanent pain relief. Trust us.

What has your experience been with any doctor or therapist’s processes? What did you have to do in a the good doctor’s office? The bad? Feel free to share.